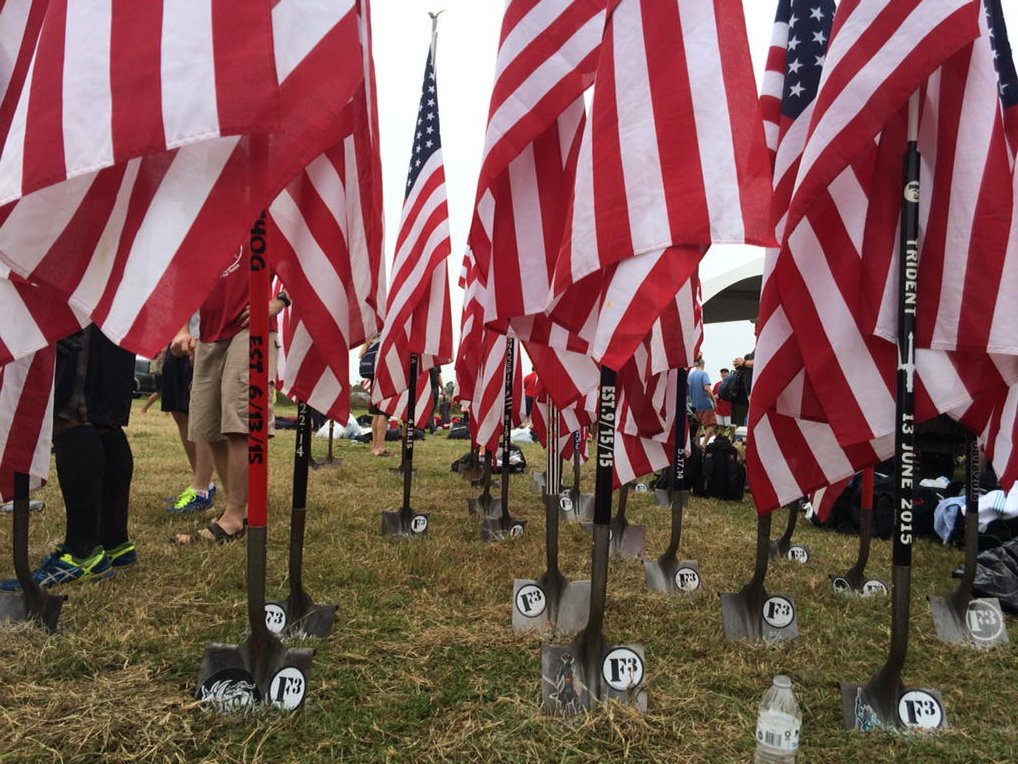 12 beasts met in the gloom to carry the shovel flag with us at NoToll. Here’s how it went down.

Mosey with SF to the parking lot
Triple Check: First man pole smokers against the posts, second man does sideways bear crawls around the oval curb, third man sets pace by running to other end of the parking lot and back.
Toga led abfest (not to be confused with Red Lobster’s Crabfest) for the hotdogs.

Pass the Q to our resident SOJ Devil Dog Flashdance
♫ P-T-P-T-Ev-ry-Day ♫: Holding the flag, Flashdance led a cadenced run of two lines with call and response around to the back corner of the fields and then back to the starting point.

Plank for the six, one last circle up for a quick Ring of Fire.

Wilson took us out.

Last night Swirly texted Your Humble Correspondent and some of the other Qs today of the sad news about Circle K’s father. Loose Goose suggested that the Heartbreakers would be carrying the flag around some this morning in honor of Circle K and his dad. YHC thought that was a great idea and a fitting tribute. Circle K has been such a big part of F3RVA over the last two-plus years and we are all indebted to his dedication to the PAX. YHC lost his father 12 years ago and wishes he had a group of men like F3 to lean on at that time. Just an encouragement from someone who’s been through this — rally around Circle K and let him know how much the PAX appreciates him. F3RVA is better thanks to Circle K and by extension the influence of his father. See below for information on services.

YHC hasn’t led a workout in a few weeks and was clearly knocking the rust off. The clear, concise direction from the Q wasn’t exactly as crisp as he might have liked. Starting out SSHs with an already winded voice was not the auspicious start YHC had hoped for. There were a few “um just start exercising” type beginnings in the COP. There was also a terrible execution of a Newton’s Cradle (a workout YHC had only read about on the Exicon) … sincere thanks to Toga for questioning the Q’s form on the attempted “exercise” and demonstrating a better and more robust alternative.  Spelling M-A-R-I-N-E with exercises was tougher than expected. The Exicon certainly bailed out YHC. “Iron Mikes” was a bit of a stretch, but everyone went with it, which YHC greatly appreciates.

YHC was happy to be teamed with Tobit and Mr. Roper during the Triple Check, but there was a breakdown of communication at one point which left poor Tobit endlessly circling the oval like the last item on a baggage carousel. Please proceed to the Delta counter to reclaim your lost luggage, Mr. Roper.

YHC’s thanks go out to Flashdance for volunteering to lead a “march” at the end of the workout. YHC could barely run at that point, and the added in singing made for what felt like a very looooooong run back to the starting point. No one seemed interested in belting out Johnny Cash for the Ring of Fire. YHC will take that as a good sign that the PAX was sufficiently smoked by the end.

YHC sends his Cobains to Wilson for asking him to explain the concept of “Ghost Flag” to the PAX and then shutting him down when he needed a moment to collect his thoughts. YHC blames the lack of oxygen in his brain by that point.

SOJ Sunday Run – OffTheBooks is on the books. If you’d prefer not to break your ankles on the Buttermilk Trail, New run at 6am Sundays called “Off the Books” at Urban Farmhouse Coalfield/Woolridge areas … check the app.

Cry Havoc and Let Loose the Hillbillies of Southside! – DaVille smoked F3RVA on their takeover last month … SOJ Takeover week starts August 7th! Check in with Rosie or YHC to grab a Q.

#2Spooky4U – Rumor has it the Ghost Flag apparently made an appearance this morning over in DaVille! Thanks to Rosie for leading the charge.

Puppy time! – Shakedown and his 2.0 (Crikey!) enjoyed MARV’s 2.0 workout at 7AM at Dogpile last week. Plan for 2.0s on the third Saturdays every month at Dogpile. YHC humbly suggests if the workout goes on the books it be named “PuppyPile.”